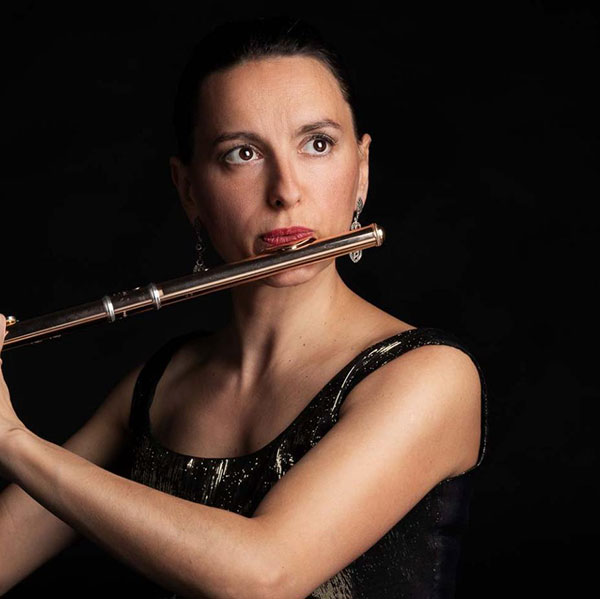 Ana Ioana Oltean was born in 1977 in Romania.

She studied in Cluj-Napoca with Vasile Gocan at the Music College, and with Gavril Costea at
the Music Academy. She attended to master classes with Pierre-Yves Artaud, Felix Renggli and
Heidi Peter-Indermühle, who was her teacher at the Berne Academy of Arts since 1999. For her
soloist diploma with distinction she was awarded the Eduard-Tschumi-Prize for the best diploma
of the year 2002. She finishes her Master of Music in Music Mediation 2013 in Trossingen
(Germany), her published master work “The Role of the Body on the Interaction with the Musical
Instrument” contains the basic information for her pedagogical activities.

She is a winner of several national competitions and of the competition in Riddes (Switzerland).
The Lyceum Club, the Bürgi-Willert-Foundation and the Kiefer-Hablitzel-Foundation supported
her with scholarships. She also won the “Förderpreis ORPHEUS-Konzerte 2002” in duo with the
pianist Simon Bucher and in 2006 with the Trio Alternances (flute, viola and harp).

Her interest is to bring to the public unknown music and to create programs which exceed the
borders of the usual, being inspired by contemporary music, jazz, folklore, improvisation and
world music. The CD “Ladies first!” came out 2010 at ARS Productions (D), containing works of
European women composers for flute and piano, with the pianist Simon Bucher. A new recording
of all chamber music works featuring the flute of Günter Raphael came out 2018.

She is a devoted teacher, guest teacher at the Academy of Arts in Bern and trainer of the
instrumental teachers especially in Romania, where she initiated and led 10 successful editions of
the Summer Classes for Flute in Bistrita. In order to support Romanian young flutists, musicians,
teachers and the music education in her country of origin, Ana created the MusiCult Association.